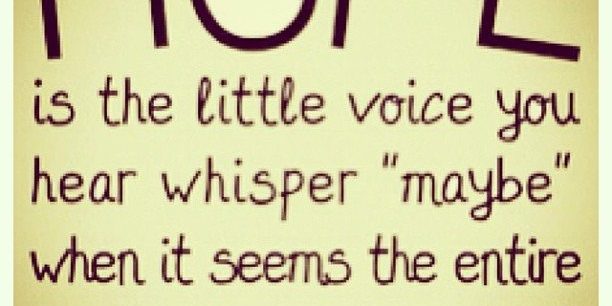 Years ago, I moved from Norway to the United States with my two little girls. While living overseas, my first husband and I started a very successful home-based business. I bought his permission to leave with our daughters by giving him half of our profitable business. It was the best business deal I’ve ever made.

With only our suitcases, the three of us flew home to begin a safer and happier life.

During those nine years of living in Norway, I ran our home-based business. Suddenly, it was gone. I had no idea what I would do.

Leaving my home, friends, and significant financial security, I started over as a single mom of two. It was scary because I had no home, no job, no plan for the future. Fortunately, I had something much more robust: Hope.

That hope carried me through renovating a hundred and six-year-old dumpy house and nursing school. Faith sustained me throughout the years of single parenting.

It was an exciting and challenging time. Hope made me strong.

“Hope is important because it can make the present moment less difficult to bear. If we believe that tomorrow will be better, we can bear a hardship today.” – Thich Nhat Hanh

Over the years, psychologists have studied optimism, grit, self-efficacy, passion, inspiration, etc. All of these are valuable. Unfortunately, there is one critical intervention that is often underrated and even shunned in our society.

Hope is scoffed at because it appears weak, impractical, and even silly. It stirs up thoughts of an eternal optimist, sitting down for a picnic while the forest burns around her.

However, studies repeatedly show that hope is critical to resilience.

“The very least you can do in your life is to figure out what you hope for. And the most you can do is live inside that hope. Not admire it from a distance but live right in it, under its roof.” – Barbara Kingsolver

Merriam-Webster defines hope as : to cherish a desire with anticipation: to want something to happen or be true

Most psychologists who study hope prefer the definition developed by the late Charles R. Snyder, Ph.D., a psychologist at the University of Kansas and a hope research pioneer.

According to Snyder et al. (1991), hope is a positive cognitive state based on a sense of successful goal-directed determination and planning to meet these goals. Snyder’s model of hope has three components: goals, agency, and pathways.

To clarify, ‘agency’ is our ability to shape our lives. We believe that we can make things happen. It also includes the motivation to reach the desired outcome.

On the other hand, a pathway is a road that gets us there. No matter the size of a goal, we need a plan and a path to achieve a goal. The target could be some as simple as losing a few pounds or as challenging as running a marathon.

In other words: Hope is the belief that your future can be better than your past, and you play a role in making it so.

Hope Is Not Just An Emotion.

Hope is not just an emotion. Instead, hope is the mindset that drives resilient behavior. Hope is the pathway to resilience.

“We have always held to the hope, the belief, the conviction that there is a better life, a better world, beyond the horizon.” – Franklin D. Roosevelt

Optimism is a positive attitude about a future event that is probable and likely to occur: the optimist expects that life will work out well and as expected (Scheier & Carver, 1993).

Conversely, being hopeful is regarded as more realistic. A hopeful individual recognizes that life may not work out as planned, yet maintains positive expectancy directed toward possible outcomes that hold personal significance (Miceli & Castelfranchi, 2010).

In fact, hope is the single best predictor of well-being compared to any other measures of trauma recovery.

Psychologist Shane Lopez, Ph.D., is a senior scientist at Gallup and author of the 2013 book “Making Hope Happen”. Lopez, together with Matthew Gallagher, Ph.D., a psychologist at Boston University, found hope to be a strong predictor of positive emotions (Journal of Positive Psychology, 2009).

Their research revealed that hope and optimism are different. Through his work with Gallop Polls, Lopez studied hope in millions of people. He found that both traits are essential for happiness and well-being, according to Lopez.

While he concedes that hopefulness alone won’t make a person happy, he deems both are required to find contentment. “You have to knock down the hope domino to get to the happiness domino,” he says.

Hopefulness is different from wishing. “Wishing is ubiquitous, but it can be kind of an escape from reality. Hope is different because it has to do with facing reality,” says Jon G. Allen, Ph.D., a senior staff psychologist at The Menninger Clinic, a psychiatric hospital in Houston. “As I see it, hope is the motivation to stay in the game.”

Hopeful people are not just perpetually cheerful types. They are not naive Pollyanna’s wearing rose-colored glasses. In fact, these people are often very realistic. After all, continuously setting unrealistic goals set you up for failure. Repeated failures can wear you down. As a result, your hope will diminish.

Hope doesn’t just feel good, it is good for you.

“In fact, hope is best gained after defeat and failure, because then inner strength and toughness is produced.” – Fritz Knapp

There is evidence that hope can buffer adversity and stress. In addition, hope can predict critical outcomes. Best of all, hope can be learned and sustained.

Human beings differ, and some people lean towards being more hopeful. Those who a more extraverted and agreeable tend to have more hope. Conversely, those of us who are more neurotic generally have less a bit less hope.

People with a high degree of hope tend to be better at setting goals.according to psychologist Randolph C. Arnau. “A high-hope person tends to have more goals, and is quicker to focus on another if they fail,”

“Hope is the companion of power and mother of success; for who so hopes strongly has within him the gift of miracles.” – Samuel Smiles

The good news is, “Hope is an equal opportunity resource.” per Lopez.

The first step is a process he calls “futurecasting.” Futurecasting requires you to envision a specific future goal. The key is to create a vision that is brilliantly alive.

Let’s say you want to learn to speak Spanish for an upcoming trip to Spain. To begin with, Lopez suggests finding pictures of the sites you plan to visit. Use these pictures to create a collage and place it in an area where you will see it often. In other words, keep your goal front and center in your mind.” Really crystallize what you want your future to look like,” he says.

The more intensely we feel about an idea or a goal, the more assuredly the idea, buried deep in our subconscious, will direct us along the path to its fulfillment.

Secondly, create a path to your goal. You may remember that the idea of pathways is central to Snyder’s model of hope. After all, once you choose a destination, you must figure out a way to get there. If you want to learn Spanish for your upcoming vacation, look into language apps and classes to path the way to your success.

“Hope can be a powerful force. Maybe there’s no actual magic in it, but when you know what you hope for most and hold it like a light within you, you can make things happen, almost like magic.” – Laini Taylor

Lopez’s research discovered that the most hopeful people create several possible solutions to a potential problem.

Conversely, less hopeful people tend to consider only the best-case scenario. At most, they may create just one or two paths to their goal. Instead, Lopez tells us, “You have to come up with many ways to overcome those obstacles.”

Trauma may require a fourth skill that Lopez calls “regoaling”. Years ago, I worked with a psychiatrist whose young son had been diagnosed with cancer. After years of medical treatment, his treatments stopped working.

Heartbroken, they had to shift their goal from helping their son live to make the most of his last months on Earth. She and her husband took a sabbatical from their jobs. They took family trips to Disney World, the Grand Canyon, and New York.

In the end, their goal changed. Rather than fighting to keep their little boy alive, their new goal was to keep him comfortable until he died. This little guy had even helped plan his own funeral. There wasn’t a dry eye in the church when the pallbearers entered wearing full out Star Wars costumes. His entire grade school class attended. Despite the heartache, the stories about this little boy left us all with hope.

“It’s always something, to know you’ve done the most you could. But, don’t leave off hoping, or it’s of no use doing anything. Hope, hope to the last.” – Charles Dickens

During these times, counseling can help people accept this new goal. In the end, they need to release old dreams and aims to create a new future.

It is challenging to give up on a dream. But hope makes it more accessible. We need hope. “Many of the ancient religious texts reference faith, hope, and love. Hope is an ancient virtue and a basic human quality,” Lopez says.

Hope is important because life can be tough. We all face obstacles. When dealing with challenges, having goals is not enough. To move towards those goals, we need to overcome all the twists and turns that come our way.

When we harness hope, we can approach problems with a success mindset. This, in turn, will increase the chance that you will actually accomplish your goals.

“Hope lies in dreams, in imagination, and in the courage of those who dare to make dreams into reality.” – Jonas Salk

Pandora, The First Woman On Earth

According to Greek Mythology, Pandora was the first woman on Earth. She was created by Gods; each of them gave her a gift. This is the reason her name in Greek means “the one who bears all gifts.”

She was created to be curious. As a wedding present, Zeus gave her a box but warned her to never open it. Pandora couldn’t stay away and opened the box.

Horrible things flew out of the box, including greed, envy, hatred, pain, disease, hunger, poverty, war, and death. All of life’s miseries had been let out into the world. Pandora slammed the lid of the box back down. The last thing remaining inside of the box was hope.

Ever since humans have been able to hold onto this hope to survive the wickedness that Pandora had let out.

Here’s the best news, everyone benefits from having hope! Not only that, but psychologists’ research also reveals that anyone can be taught to be more hopeful.

It’s always something, to know you’ve done the most you could. But, don’t leave off hoping, or it’s of no use doing anything. Hope, hope to the last!